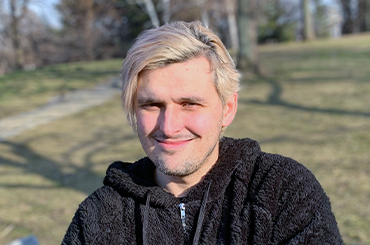 Meet Maria and Vasil - two of our Telerik Academy Alpha mentors and Alpha alumni. Dive in and learn why mentorship is a key part of your path to a successful IT career. 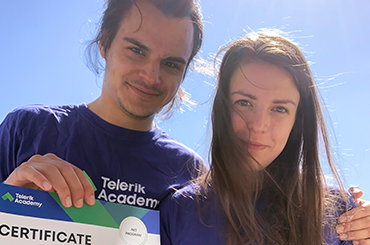 One couple’s journey to successful IT careers with Alpha C#

Meet Yana and Dimitar - one couple that changed careers with Telerik Academy Alpha C#. How did their journey to a successful IT career go? Learn from their story. 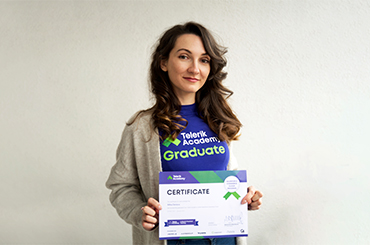 Shortly after the Upskill Salesforce Commerce Cloud program, Milka started a new chapter at AIОPSGROUP. She has discovered an environment full of possibilities and a new career path. Read her story!

Equipped with everything needed to kickstart a career in IT

Until 5 years ago, Svetla Ivanova’s educational and professional background had been entirely in the finance sector. After deciding to switch careers, she went from a finance expert to a software developer with the help of Telerik Academy. Shortly after graduating from our professional program for master junior talent, Svetla joined Bede Gaming and has been part of their software engineering team ever since.

Georgi Georgiev was studying Informatics and Cybersecurity in Saarbrücken, Germany, when he first heard of the then brand new 6-month program for a successful career start in IT - Telerik Academy Alpha. Eager to pursue a career in Bulgaria – it didn’t take long for Georgi to put his academic studies on hold, came back to Bulgaria and apply to Telerik Academy Alpha. Immediately after graduating it, he landed his dream job at Tick42.

Making a leap from construction to the IT industry ​

Rusi Rusev graduated from Telerik Academy Alpha with JavaScript in May and shortly after that kickstarted his first IT career as Junior Front-End Developer at Gtmhub. His university education and professional experience, however, were in an entirely different field. Rusi has a master’s degree in “Structural Engineering” and worked in the construction industry for a while. When he felt the need for a change, he turned to Telerik Academy to successfully switch careers.

How to become a developer?

With the continuously growing demand for IT talents and compensations higher than the average for Bulgaria, more and more people pursue dev careers. For some of them, this would be their first job, but others are changing their career paths. So, how to become a developer? The answer comes in an interview with Martin Veshev for Money.bg. Watch it!

At the end of 2017, Telerik Academy – one of the leading tech-ed organizations in Bulgaria – was spun off from Progress as an independent organization led by the four founders – Svetozar Georgiev, Boyko Iaramov, Vassil Terziev and Hristo Kosev. In an interview for “Capital” Alexandra Mechkova, Telerik Academy CEO, talks about how the Academy grooms holistically prepared IT talent through intensive tech and soft skills trainings.

Why and How Accountants, Teachers, Managers Switch To Developer Careers?

Europe needs more people with digital and ICT skills. Bulgaria is no exception. Read how Telerik Academy grooms successful Master Junior talents through our specially designed six-month program Alpha. Get inspired by the stories of Maria Dineva and Alex Parvanov, who decided to switch to software developers after working in a completely different field.

Telerik Academy won the grand prize among all categories and competing against 70+ companies across different industries – “Best Company of 2020”. The Academy took home yet another award – “Best Company of 2020 in the Education Category”. The ceremony brought together 400 people, eagerly awaiting the announcement of the winners.

In an interview for DevStyleR Alexandra Mechkova, Telerik Academy CEO, talks about the importance of training and upskilling employees, and growing junior IT talents.